Klingon Academy has two things going for it. First off is the whole Star Trek thing. I admit that I did enjoy this game on this level. Not being a big fan of the show and all I expected not to get caught up in the whole Klingon thing, but the mission briefings and the ship models really reinforce the Star Trek idea. Klingon Academy Demo. A prequel to Star Trek VI: The Undiscovered Country, Star Trek Klingon Academy stars Christopher Plummer as General Chang and David Warner as Chancellor Gorkon. Under the tutelage of Chang, you will learn battle tactics and the code of the Klingon warrior. Simon and Schuster's Star Trek: Klingon deals heavily with Klingon culture. It is nice to see Gowron back again, as he makes for the perfect Klingon mentor. The game is actually quite addictive despite its poorly implemented graphics and game engine, which can be quite frustrating at times.

The Immersion Studies is a simulation designed as a hyper-narrative Holodeck program where you play as Pok, a young Klingon learning the ropes on becoming a warrior through the Rite of Accession. This is no easy task as you must obey commands in accordance to Klingon culture, and take action based on duty, respect, tradition and honor. Along the way, you'll bump into your mother and father, Torghn and K'Tar, and also Qua'lon, your uncle. Your neighbors are Vok and T'Var from The House of Ingka. There is a bloody murder by a Romulan weapon and you must find out who is behind this evil scheme, whether that is a Romulan, or even a Klingon traitor! 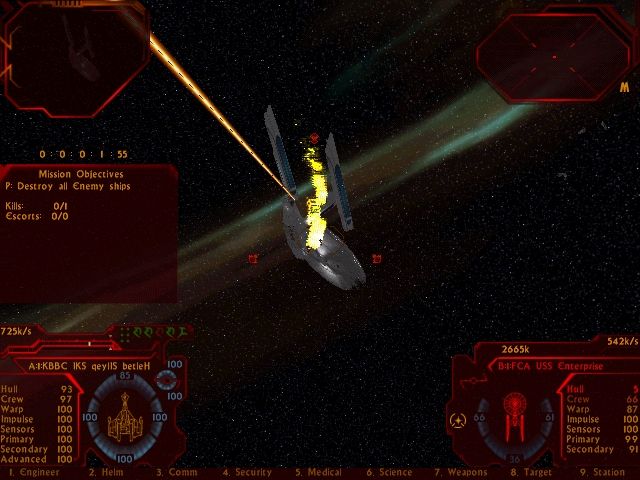 The interface is like all other full-motion video games, but this one looks horrible. If you stand far back from the monitor it might look okay, however. Upon requiring action from the user, the game prompts a Daqtagh, a Klingon knife. You have to point it at an area of the screen to choose your action, whether you wish to attack someone or point at an item when asked to do something. The problem is that pressing on something doesn't always invoke a reaction, and thus your time runs dry and you have to start over again. This can get tedious and even impossible, leaving you stuck -- unless you use a cheat code to surpass the situation. However, even the cheat codes are flawed, only allowing you to skip or rewind huge amounts of video.

Speaking of video, one must wait for long periods of time throughout playback. There is no way to fast-forward something you've already seen. This is why saving your place is crucial, which is not a bad thing but starting over just to load your game is an awful way to get back to where you left off last. In addition to this problem, pausing the game to get information on various Klingon artifacts throughout the rooms is a useful idea, but is hardly ever required at all to complete the game.

The process in which they've implemented the video streaming is not all that unique, but it does have its moments. However, the interactive element is very, very linear. Basically it's like watching another episode of Star Trek instead of involving yourself within that realm. On that note, it is however quite interesting to say the least, even addictive in a way. You want to get past critical circumstances in order to see what happens next, and that is where it drives you to complete the game. Other than that, what you get is a long waste of time.

All of the sound effects and music are really good because they are not only CD quality but comprise of a movie or television product, since you're obviously watching live-action video. Unfortunately, the so-called 'enhanced audio' feature doesn't really make significant improvements over the default sound option. As well, the computer voice is lower than the rest of the volume during video playback, and doesn't sound much like Majel Barrett Roddenberry.

The simple point-and-click interface is certainly not a complex system. There should have been more interactivity than this. Probably the highlight of this package is the Language Lab/Power Klingon CD, where you'll learn how to pronounce and remember words and phrases from the Klingon language. It's presented by pictures, video and voiceover by Michael Dorn and Marc Okrand, which is always a welcome addition. It also has little games and quizzes to test your mastery. There's not much you can do but the implementation of Dragon Systems' speech recognition and recording technology enhances replay.

Being that this game was made in 1996, the video technology is comparable to other games of its time, although it could have been much better anyhow. Although Jonathan Frakes did a wonderful job directing the video portion of the game, which is quite dramatic, the failure to be non-linear is more than evident. Star Trek: Klingon isn't even close to being the best, but it is a nice attempt at the full-motion video genre (which became quite redundant after a while).

Graphics: Four years after the game Night Trap and video technology still looks horrible? It couldn't be closer to the truth with this game; at least it's full-screen.

Sound: The sounds and theme music is done well because it's obviously a full-motion video game. However, there are some glitches and the 'enhanced audio' feature is not really enhanced.

Enjoyment: The game is frustrating when you try to click on the onscreen objects and it does nothing but rewind the video to start over again. The interface is flawed and mundane, however the dramatic video keeps you involved until you complete the game.

Replay Value: There is really no replay value for the Immersion Studies program. The Language Lab CD on the other hand lets you learn the basics of Klingonese, which is decent but could have been done better as well. If you want to see what happens if you choose alternative routes during your Holodeck game, then you'll no doubt get some more video -- but don't count on branching paths or anything of the sort!

Autocad 2013 crack for mac. How to run this game on modern Windows PC?