Today, Smith & Wesson is mostly known for revolvers and their growing line of M&P pistols. Despite the rapidly growing popularity of these polymer-framed striker fired semi-auto pistols, there’s also a lot of buzz around the former metal-framed S&W pistols that were discontinued a few years ago.

Prices on the used market for the so-called 1st, 2nd, and 3rd generation S&W pistols are still affordable, but have been rapidly rising over the past couple of years. These pistols are usually tough, reliable, and excellent shooters. Alphastar. If you happen to run across one for a good price, now would be a great time to snatch it up.

The trouble with that plan is the absurdly confusing system that S&W used to assign the model numbers for these pistols. Today, their M&P pistols follow a pretty logical formula. I carry a M&P9c — a compact 9mm. Makes sense, right? Well, the 3rd Gen equivalent of that pistol is the 6904. But if it was made before the late 80’s, it would be the 2nd Gen version — the 469. And the single stack version would be the 3914, which is virtually identical to the 908. Confused yet?

Unless you’ve committed these models to memory, looking at the numbers stamped on the slide of an old S&W pistol in the case at a gun shop or an online ad doesn’t really tell you much. Even if you ask Google for some help, you might have to wade through a multi-page forum thread to get a straight answer.

Well, believe it or not, there is some logic to the old S&W numbering system, it’s just not particularly intuitive. So we whipped together this S&W semi-auto model number quick reference chart to make it a little easier for you the next time you misplace your S&W decoder ring.

Our chart covers most of the regular production models for the discontinued Smiths chambered in major service calibers. There are a few less common ones out there, but these are the pistols you’re most likely to run across today. Even with the chart, there might be a few confusing details about the numbering system, so keep reading for a little background info on each “generation” of S&W autos.

The first S&W semi-automatic chambered in a service caliber was the Model 39, which first saw the light of day in 1954. The aluminum alloy-framed 9mm pistol had an 8-shot single-stack magazine, a 4-inch barrel and a traditional double action/single action trigger with a slide-mounted safety/decocker, similar to what many people are familiar with from the Beretta 92 series. The Model 39 was developed as a potential replacement for the U.S. Army’s M1911A1. The Army declined to adopt the Model 39, but the pistol was a commercial success, and was even used by a few police departments as one of the very first semi-autos carried by American law enforcement.

In the early 1970s, S&W released a version of the 39 that used a double-stack 14-round magazine dubbed the Model 59. Together, the 39 and 59 are considered the “first generation” of S&W semi-autos. All of the following S&W 2nd and 3rd generation 9mm pistols are essentially derivatives of these two and in many cases, their model number provides some clue to that origin.

In the late 1970s the S&W models 439 and 459 were released, which are considered the first of the second generation pistols. These were basically the 39 and 59 with a few small changes and the number “4” added to the begining of the model number. Steel framed versions of these pistols followed, available with either a stainless, blued, or nickel finish. Blued and nickel model numbers start with “5” (539, 559) and the stainless steel models start with “6” (639, 659).

In the mid 1980s, S&W released two alloy-framed compact versions of the 59 series; the 469 (blued or nickel finish) and 669 (stainless finish). Establishing the form factor that the third gen compacts would follow, these pistols had a 3.5-inch barrel and 12-round magazine.

Around this same time, S&W also began producing their first .45 ACP pistol — the model 645. This was a large frame, single stack pistol with an 8-round magazine, 5-inch barrel, and DA/SA with slide-mounted safety/decocker just like the 9mm pistols. There is one variant of the second gen .45 pistol — the single action only model 745, which was a special limited run intended for IPSC competition shooters. 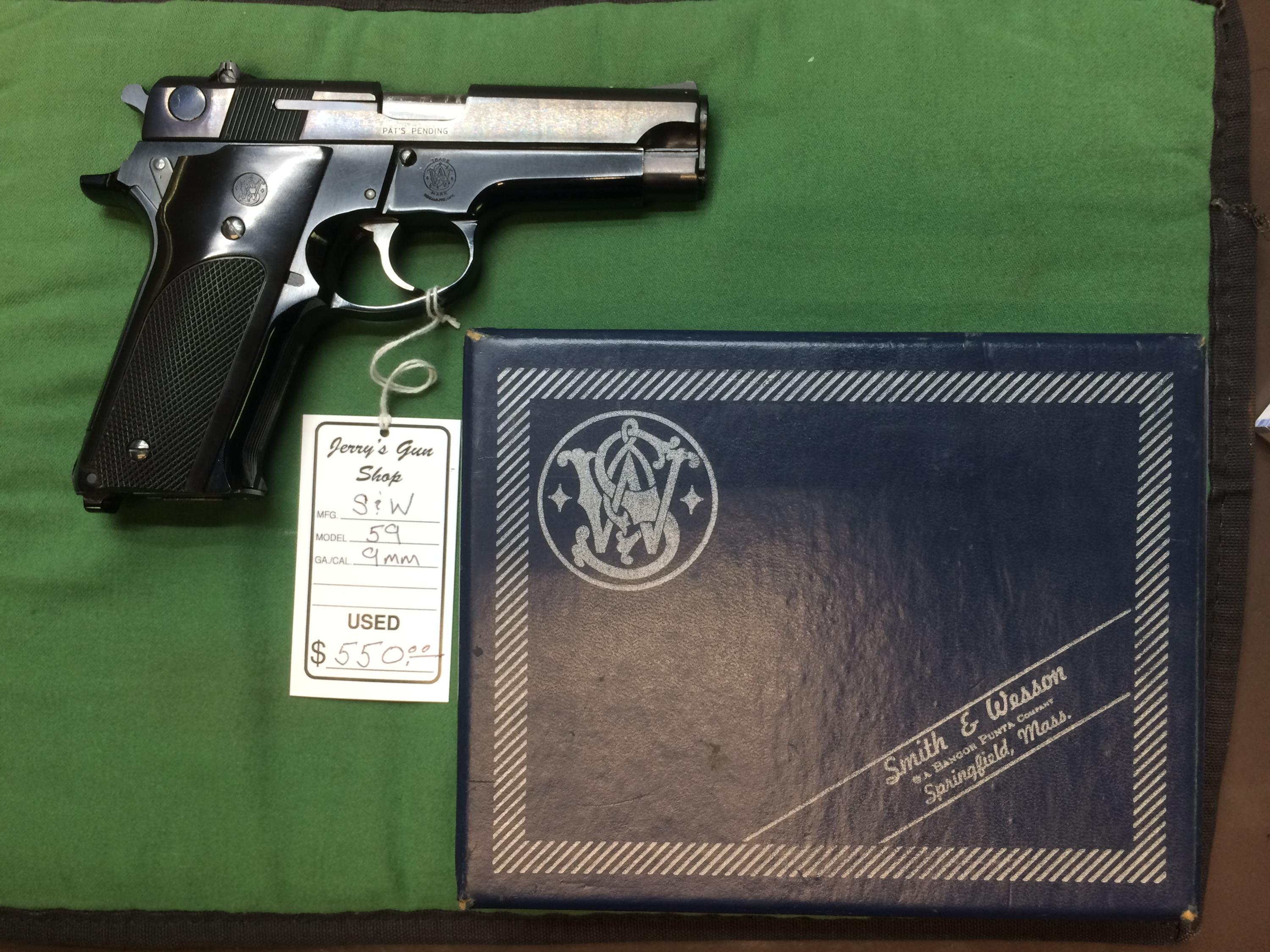 The third generation of S&W pistols started hitting the market in the late 80s. They can be easily spotted by their four-digit model numbers. S&W continued the numbering trend they had started on the 9mm pistols — the 3900 series are full size and compact single stack pistols, the 5900 series are double stacks, and the 6900 series are compact double stacks.

So, looking at the first two digits of a four-digit model number from a 3rd gen pistol, we can know the caliber, and if it’s a 9mm, we might also know the frame size. The rest of the info we’d need is in the second half of the model number.

The third digit indicates one of nine possible combinations of action type and frame size. Most S&W autos are DA/SA, but not all. Some are double action only (DAO), and a few were even made with a slide-mounted decocking lever and no external safety (similar to what you’d find on a Sig P220 series pistol). Each model series has a frame size and barrel length that is “standard” for that series, which we’ve listed on the chart. The third digit will tell you if a given model is the standard size, mid-size, or compact.

The final digit in the model number indicates the frame material and finish. Frames are either steel or aluminum alloy and the finish is either blued/black (sometimes with a nickel plating), or stainless/silver.

What makes this complex system frustrating to follow is that there are multiple exceptions to the product “codes”. Some are pretty easy to figure out like the “value” series pistols. These were budget versions of the third gen pistols that lack some of the finishing touches of the standard models and have a three-digit model number. The first two digits reflect the caliber (9, 40, or 45).

The Chief’s Special pistols are also easy to spot, like the one in the header image of this post. They are single stack, sub-compact variants with a “CS” pre-fix and they’re some of the most sought-after 3rd gen pistols on the used market. There’s one model each chambered in 9mm, .40 S&W, and .45ACP called the CS9, CS40, and CS45 respectively.

Besides these obvious exceptions, there are a few sneaky model numbers that look normal but don’t follow the numbering trends. For instance, the 6906 should really be the 6903 — a “6” for the final digit normally means stainless steel, but the 6906 is an alloy framed pistol with a silver stainless finish.

The compact .40 S&W pistols can also be confusing. Most are double stack, but a few single stack versions were made. The model 4040PD in particular breaks multiple model numbering “rules” and seems to have been given its name arbitrarily.

Letter suffixes are another detail to watch for. A couple of letters tacked to the end of the model name might mean something minor like a new finish, but they can also indicate major changes like the “TSW” (Tactical Smith & Wesson) series of pistols which indicate the addition of features like improved sights and accessory rails. Sometimes, the TSW pistols were built with a completely different frame size and barrel length than the standard model.

Some of the oddball model names come from pistols developed by S&W’s in-house custom shop, the Performance Center. To keep things simple (relatively speaking, anyway) we didn’t include these and other obscure models in our chart. If you want more detailed information on any of these models, I highly recommend picking up the Standard Catalog of Smith & Wesson which was a huge help in verifying the info for the chart.

Hopefully, the next time you’re trying to track down a deal on an old Smith, this info will help your search go a little quicker. If we’ve missed anything important, or if you spot any errors in the chart, let me know and I’ll try to correct it ASAP. If you guys like this one, be sure to tell us in the comments and maybe we’ll tackle S&W revolvers in the next one!

It was designed for the U.S. Navy as a large-capacity version of the S&W Model 39, the basis of their Mark 22 'Mark 22 Hush Puppy' suppressed pistol. In 1965, the U.S. Navy commissioned a version of the S&W Model 39 that could take the 13-round magazine of the Browning Hi-Power. In early 1970, a dozen experimental all-stainless-steel prototypes were made and were issued to Navy SEAL commandos for evaluation in the field. The firearm was not adopted.

The Model 59 was manufactured in 9×19mm Parabellum caliber with a wider anodized aluminum frame, a straight backstrap, a magazine disconnect (the pistol will not fire unless a magazine is in place), and a blued carbon steel slide that carries the manual safety. The grip is of three pieces made of two nylon plastic panels joined by a metal backstrap. It uses a magazine release located to the rear of the trigger guard, similar to the M1911A1.

The magazine for the Model 59 is similar to that of the Browning Hi-Power. Initially introduced with a capacity of 14 rounds, this was later increased to 15 rounds for future variants. Smith & Wesson also made an extended, 20-round version. Many firearms have been introduced to use this pattern of magazine including the Marlin Camp Carbine as well as the Kel-Tec P11, Sub9, and Sub2000.

The Smith & Wesson Model 459 was an updated version of the Model 59 with adjustable sights and checkered nylon grips. This model was discontinued in 1988. 803 units were produced in a brush finish with special grips made to FBI specifications.

Model 59 Smith And Wesson Serial Numbers And Date Of Manufacture