Ancient Basin is a Location in Hollow Knight. Please see Walkthrough for other areas. The Ancient Basin is an area found deep within the kingdom of Hallownest. It was originally the location of the White Palace which is the home of The Pale King alongside his associates and guards.

Once the Knight has gathered 1,800 Essence, the Seer is able to awaken the Dream Nail, allowing them to travel through any dream. The Knight can then enter the White Palace by using the Dream Nail on the corpse of a Kingsmould in the Palace Grounds. It is unknown whether this is the actual White Palace or merely a memory of it.

NPCs in the area

Heading into the Ancient Basin

To get to the Ancient Basin, retrace your course back to the arena of the Dung Defender at the Royal Waterways towards the lever that was activated to drain the acid water. From here, you'll want to enter the next section to your right then drop all the way to the bottom where you'll find a broken lift. Be careful going down since you'll come across platforms that have spikes, so be sure to use jump onto the platforms one at a time and always look down to check your surroundings. Once you've reached the bottom part of the room, you can find a Whispering Root tree to extract Essence which inside a secret room to your right and the next section you'll have to enter to your left - upon entering the next section, drop down under the bridge, slide down the pillar and then use Crystal Heart to fly across the other end to find 1x Wanderer's Journal next to a corpse of a bug. 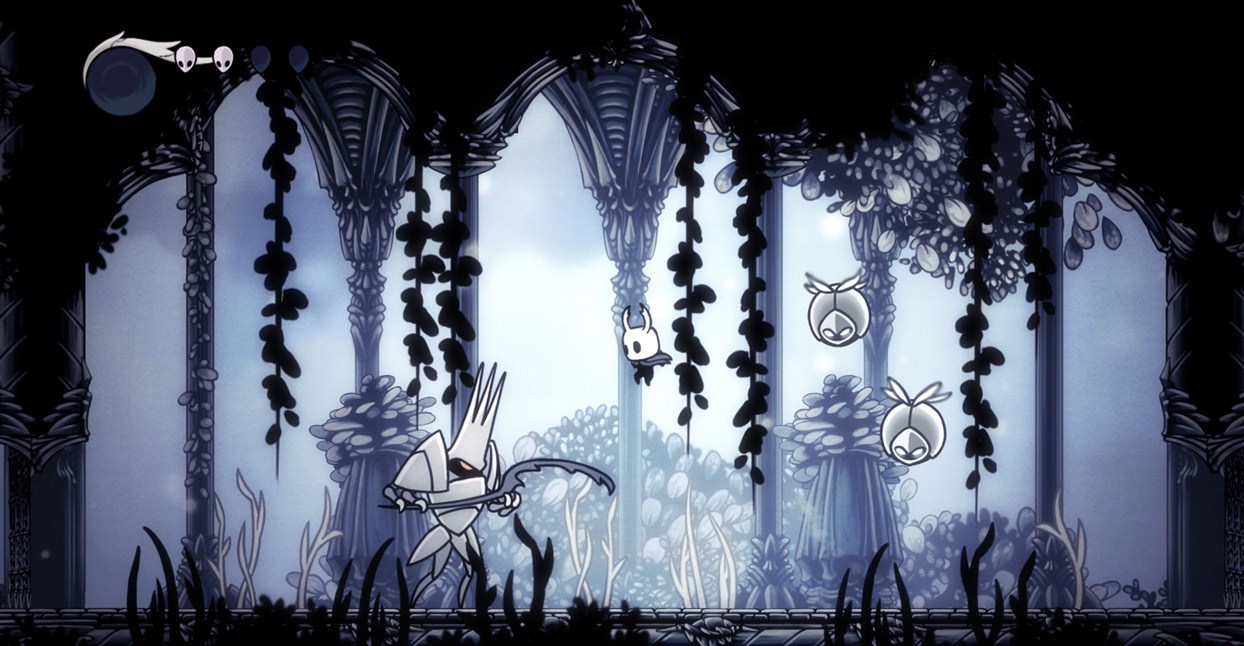 Multiple proxy manager software. After acquiring the Wanderer's Journal, continue heading west by using the elevated platforms to get across. Fight your way through the Winged Sentry and Lance Sentry until you reach the southwest end side of the room where you'll find an opening that will take you into the tram station. Once you've arrived at the station, continue heading west and then drop down into the hole leading into the next section.

You'll now encounter a new enemy called a Lesser Mawlek, these creatures are tricky since they spit out infected blobs and strike by swinging their legs forward. After killing the enemy, drop down into the gap and use Desolate Dive/Desecnding Dark to break the shaking floor below you. There will be another Lesser Mawlek guarding a trapped Grub. Now, you'll have to acquire a Pale Ore.

Climb back up after rescuing the grub until you reach the top then head west until you come across a path that has Infected Balloons appearing at the background and through the path. Follow the path until you reach a small arena where you'll encounter 2x Lesser Mawlek, you'll need to kill both of it to proceed further. Once that's dealt with, continue heading to your left where you can find 1x Pale Ore next to a broken shell.

After you've acquired the Pale Ore and have freed the Grub, head back to the tram station and drop down into the next section beside the toll machine where you'll respectively arrive at the Ancient Basin. As you head down, you'll find a room with a fountain to your right. If you drop 3,000 Geo into the fountain, you can acquire 1xVessel Fragment as a reward.

You'll also hear Cornifer humming as you head down, and you can find him just below the room with the fountain. Once you find him, you can purchase a copy of the map for 112 Geo. From here there are two paths that can take you to a sub-area and another location. If you head down southeast from where Cornifer is, you can find a path going up that leads to a sub-area called the Palace Grounds which requires the Monarch Wings ability to reach it while the southern end can take you to The Abyss which requires the King's Brand key to unlock the gate. So for now, the only way you can go to is southwest of Cornifer's location where you can find a toll machine that requires 150 Geo to unlock a bench. Pay the amount and rest on the bench to save the game and update your map - when you're done, continue going west by using the Crystal Heart ability to get across until you reach the next section.

When you're in the next section, follow the path where you'll encounter another enemy called a Mawlurk. These creatures are immobile and can be found either on the ground or ceiling continuously spitting out infected blobs upon contact. As you encounter the third Mawlurk that is on the ceiling above the small platforms and spiked pits, cross the path and then drop down the next passage where you'll find a large dead creature that looks like a Mawlurk - you can go inside its mouth to find a secret room where you'll find 1x Simple Key next to a corpse of a bug. From there, you'll want to head back up and head west where you'll work your way around back to the previous section.

Once you're back, head west, then climb up to the top and continue going west until you reach the main boss of this location which is the Broken Vessel. You'll know you're on the right path once you see infected balloons at the background which indicates you're near the arena of the boss.

Upon entering the arena, walk by the corpse of the Broken Vessel and the gates will close. The arena will then begin to shake and multiple Lifeseeds will emerge and rush in to fill the broken shell which forms a large bulb protruding out and causing the corpse to reanimate in order to attack The Knight. You can click here to learn more about the strategies on how to defeat this boss. Once you've defeated the Broken Vessel, the blobs covering the left side of the arena will burst, allowing you to enter the path leading to the Monarch Wings. Simply follow the path going west until you reach the end where you can consume the Monarch Wings ability that allows The Knight to perform a double jump. 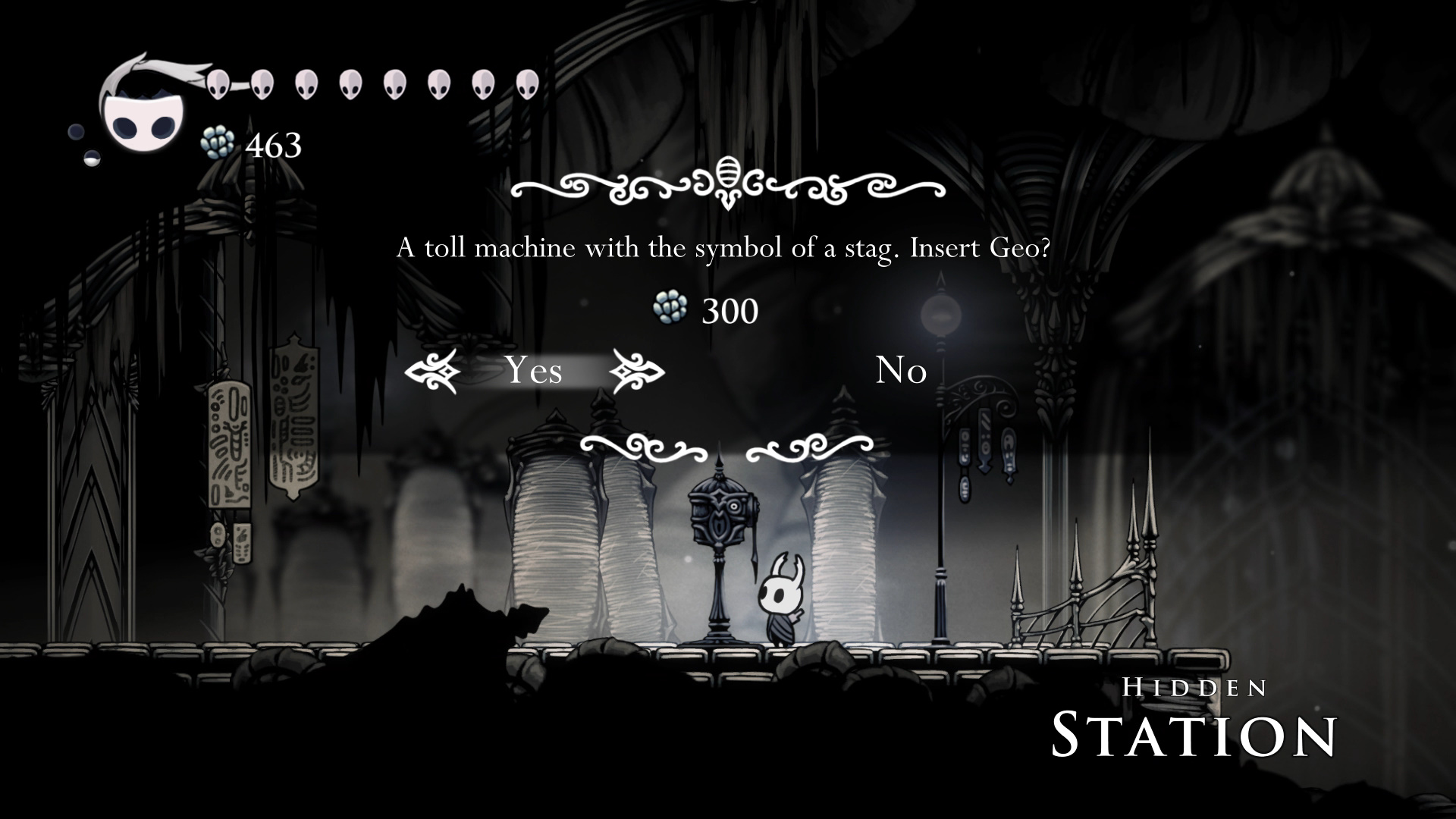 Once you've acquired the ability, head back to the entrance by going east until you reach the column that is too high for you to reach. You can unlock a shortcut by going east from the Broken Vessel's arena and by breaking the wall. With the Monarch Wings consumed, you can now reach the higher part of the room with the help of the newly acquired ability.

When you arrive at the top, go west until you reach a corner filled with spikes. The Grub can be found at the top left corner of the area, and in order for you to reach it, you'll have to simultaneously jump, dash, and cling onto the walls to reach it. After rescuing the Grub, you can head back down and retrace your course back to the bench.

Upon arriving at the Palace Grouds, continue heading east until you reach a dead end. You can break the wall to reveal a secret room that leads to another sub-area called the Hidden Station. You can unlock the stag station by paying 300 Geo at the toll machine, you can also find a bench that you can use at the right-hand side of the area - up next, Deepnest.