SIMPLELINK-SDK-TI-15-4-STACK-PLUGIN — The SimpleLink™ SDK TI 15.4 Stack Plug-in is a companion software package that enables the use of the IEEE 802.11.15.4 stack from TI on any standard SimpleLink microcontroller (MCU). This plug-in supports the SimpleLink Sub-1 GHz CC1310 wireless MCU as a network processor.

This LaunchPad comes with driver support and a software development kit (SDK) with 40+ applications for Wi-Fi protocols, internet applications, and MCU peripheral examples.

This page will document my experiences with the CC3200-LaunchXL using Linux as development platform.

Getting the SDK from Texas Instruments

For downloading the SimpleLink Wi-Fi CC3200 Software Development Kit (SDK) you need a 'myTI' account which you may create for free.

The SDK is a Windows executable which simply installs all the files needed for development on a Windows platform. To be able to use the files on Linux you may either run the SDK installer on a Windows box and copy the directory tree to your Linux system, or you may run the installer with wine directly under Linux.

Running the installer on Windows creates a directory tree under C:tiCC3200SDK_1.0.0.

As stated above, you may run the SDK installer under Linux with wine:

The CC3200 Software Development Kit consists of a collection of hardware and software documenting pdfs, a collection of example program sources, the sources of the hardware driver library/application development framework and some tools to support development with serveral IDEs and tool chains.
Of course the GNU toolchain (gcc) is the one interesting me.

The debug interface is provided by an FTDI FT2232 chip with custom vendor and product IDs. To make it accessible for the Linux system, there is an udev rule (from here) needed:
/etc/udev/rules.d/99-tiftdi.rules

With the ftdi-sio module loaded (by the above udev rule or otherwise), I get two /dev/ttyUSBx devices when the Launchpad is plugged in.

In my setup, OpenOCD seems to write access /dev/bus/usb/<bus_num>/<node_num> which is owned by root:root. This ownership is not changed by a GROUP:='dialout' statement in the above udev rule.

So I had to add an additional rule to change group ownership of this device file.
My /etc/udev/rules.d/99-tiftdi.rules looks like this:

/usr/local/ftdi_chown.sh is a tiny script getting bus id and node id from udev via environment and changes the group ownership of the respective device file.

Running gdb/openocd as described below will remove the first of the two /dev/ttyUSB* for use as the debug interface.
The second /dev/ttyUSB* may be used as a serial console by the target program.

Using OpenOCD in version 0.8.0, the configuration file for the debug interface needs to be changed.
(same has been successfully tried with OpenOCD version 0.9.0)

Starting OpenOCD with the following command:

Stop OpenOCD by pressing Ctrl-C. In the future it will get started from the gdb debugger.

Download the prebuilt binaries of thearm-none-eabi cross tool chain for Linux from launchpad.net. Unpack it to an appropriate directory and add the bin/ directory to the execution path.

You may want to add the last line from above to ~/.bashrc to have the path to the arm tool chain binaries available in every future shell.

Compile one of the examples from the CC3200 SDK:

To be able to upload, run and debug the compiled binary for the CC3200, you may need to move the jumper from P58-VCC to SOP2.
The jumpers should be set like in the picture below.

Edit the OpenOCD start command in ~/cc3200-sdk/tools/gcc_scripts/gdbinit to make shure OpenOCD finds it's appropriate configuration file.
Mine looks like this:

The gdb should upload the blinky binary to the CC3200 and print something like below:

Pressing 'c' (for continue), then 'enter' should run the uploaded program and you should see blinking the three LEDs D5 - D7 one after another in a one second interval.

This file contains the following information:

THIS IS PRE-RELEASE SOFTWARE. CONTENTS AND DIRECTORY STRUCTURE ARE SUBJECT TO CHANGE.

Before building a specific application, complete the following steps (we are referring to the subscribe_publish_sample application here, but the same procedure applies to other samples as well):

On the command line, enter the following commands to build the application:

Certificate files used by the samples need to be obtained from AWS using this procedure: 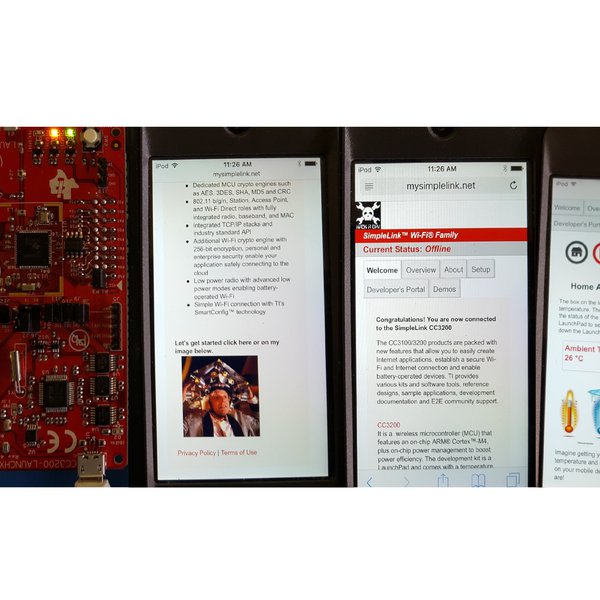 Before building the tool, complete the following:

On the command line, enter the following commands to build the application:cd <AWS_INSTALL_DIR>/certs/platform_tirtos/cc3200 C:/ti/xdctools_3_31_01_33_core/gmake all

Setting up Code Composer Studio before running the samples

All samples rely on a set of certificates from AWS. As a result, the certificates need to be stored once into flash memory prior to running the samples. To flash the certificates, simply run the flasher tool you have previously built using this procedure: