Age of Empires II: Definitive Edition celebrates the 20th anniversary of one of the most popular strategy games ever with stunning 4K Ultra HD graphics, a new and fully remastered soundtrack, and brand-new content, “The Last Khans” with 3 new campaigns and 4 new civilizations.

Explore all the original campaigns like never before as well as the best-selling expansions, spanning over 200 hours of gameplay and 1,000 years of human history. Head online to challenge other players with 35 different civilizations in your quest for world domination throughout the ages.

Choose your path to greatness with this definitive remaster to one of the most beloved strategy games of all time.

Celebrate the 20th anniversary of one of the most popular strategy games ever with this definitive remastered edition
Stunning 4K Ultra HD graphics and fully remastered audio
Enjoy the complete content collection, plus all-new content, “The Last Khans”

Over 200 hours of gameplay across 1,000 years of human history.
Head online to challenge other players with 35 different civilizations in your quest for world domination throughout the ages.

Insiders unlock access to exclusive news, updates, and opportunities to provide feedback about future releases. Here are some of the perks:

Tariq ibn Ziyad: In the early 8th century, Tariq ibn Ziyad prepares to lead an army of Berbers and Arabs across the sea to Iberia, enthralling his troops with promises of wealth and glory. Will their might be enough to defeat the fearsome infantry of the Visigoths and bring the banners of war to the powerful Merovingian kingdom lying beyond the Pyrenees? Their success-or failure-lies in your hands.- Sundjata: The once great Ghana empire has fallen and West Africa is in turmoil. Netflix app not working on windows 10. Sumanguru, King of the Sosso, is poised to forge a new empire. Said to possess a magical instrument that guarantees victory, he has led his Sosso warriors to conquer old Ghana and a small Mandinkan kingdom called Mali. Can Sundjata, the crippled prince of Mali, defy the odds, defeat Sumanguru, and become the most powerful ruler of West Africa?- Francisco de Almeida: On the fringes of Europe, the Portuguese manage a meager and unsure existence, hardened by centuries of war against the Moors and rival Christian kingdoms.

Now, daring explorers have returned from India and given Portugal hope of glories and wealth unachievable in the Old World. Can you lead a Portuguese armada to the East and forge an empire that spans three continents and two oceans? A new world awaits!- Yodit: The beautiful princess Yodit has a promising future at the Aksumite court. But when her jealous nephew accuses her of theft, Yodit is forced to flee her home country. Witness how exile shaped this fallen princess into a mighty queen. For centuries the story of Yodit's vengeance would invoke fear in the hearts of all Ethiopians.Features. 4 new civilizations- 4 new campaigns- Improved AI- 10 new Special Maps- 8 new Real World Maps- 5 new Random Maps- 10 new terrains- Sudden Death mode- New generic units & technologies- Countless balance adjustments- Many new scenario editor objectsAdditionally, AoE2HD Patch 4.4 has been released today.As a limited time offer (ending November 9), AoE2HD and The Forgotten are on sale at an 80% discount, while The African Kingdoms is on sale at a 20% discount, so if you like sales, make haste!As always, feel free to share your thoughts and discuss below.

On a side note, now that the game has been released, I can be a lot more forthcoming with answers to your questions. Feel free to fire away with your questions (I reserve the right to use discretion with which questions I can answer ) and I'll be glad to answer as best I can! I'm sure other folks on the team will be watching and answering as well. The expansion looks great, a lot of improvements since The Forgotten.-The Campaigns look more AoC styled.

I like that.-The New Voice Acting is great, I was impressed by the quality.-Vast improvements on the AK and TF Unit Graphics to make them blend more with the ES units.-The New Cliffs look amazing!-Lots and lots of good-looking new eye-candy and other stuff to the scenario editor.-Nice job with the new civs. I liked all of them.-I don't like the new graphics for the Condottiero, i think the older ones were better.-Loading Screens take a rather long amount of time to load (compared to the other expansions)-the new waterfalls look kinda weird, and that pixelated and repetitive graphic hurts my eyes.-You didn't fix the Boyar's idle animation-Overall, the African Kingdoms expansion is great. After all the hype, It stood up to my expectations, and they weren't low!

I haven't played all the campaigns yet but I'm enjoying it so farNow, just do some polishing here and there and you can make this expansion really complete! I have more bugs for refix:-Portuguese campaign - 2 crashes. First after I entered the grey city and demolished few buildings there, Second when building farms in second try.-When I open old scenario (scx2) and save it, it gets '.aoe2scenario' and no more I can open it in trigger studio.-As someone has already mentioned idle villager buttom doesn't work-In scenario in dialogues during the game there is strange mix of fonts. It starts as usual, then switched into something like 'Franklin Gothic Medium' font in Word.

Lack of direct LAN (local area network) play is one of the reasons why many of the fans of the classic Age of Empires 2 are quick to dismiss the HD remake of the game. A LAN game is a game played by players whose computers are connected together by a local network, allowing them to avoid having to use the often slow online multiplayer servers.

Is it just me or do some of the new animals move a little wierd? Like the zebra, it's animations aren't smooth, it looks like there are missing frames.Indeed, also the Lion has very short legs and it looks like he is running in mud (the rest of his legs are below the ground). Wild Elephant is a Boar replacement, so the size is intended, the animations are the same as the Elephant Archer, except for the running.No, they are not, the EA animations are also not perfect but much better (its body is properly affected by each step, while the Gaia Elephant is 'sliding'). Compare it to the original War Elephant, it looks completely out of place. You shouldn't ignore the size of the animal, when it's already included in the game as other units (even AOE1 got this right, despite being much less proportional). As for food amount, IMHO Gaia Elephants could be less on the map with more food, instead of replicating the old system again and again. AOM is a very good example of animal 'abundance', different animals with different food amount.

What's the issue with Magyar Huszar?It's a different unit that doesn't fit. Looks like a Civ3 unit (I'm not even sure if it isn't, it's from the old FE mod).Another disappointment was the lack of proper testing, the patch broke too many things again, this doesn't look very professional, more like a pre-release. 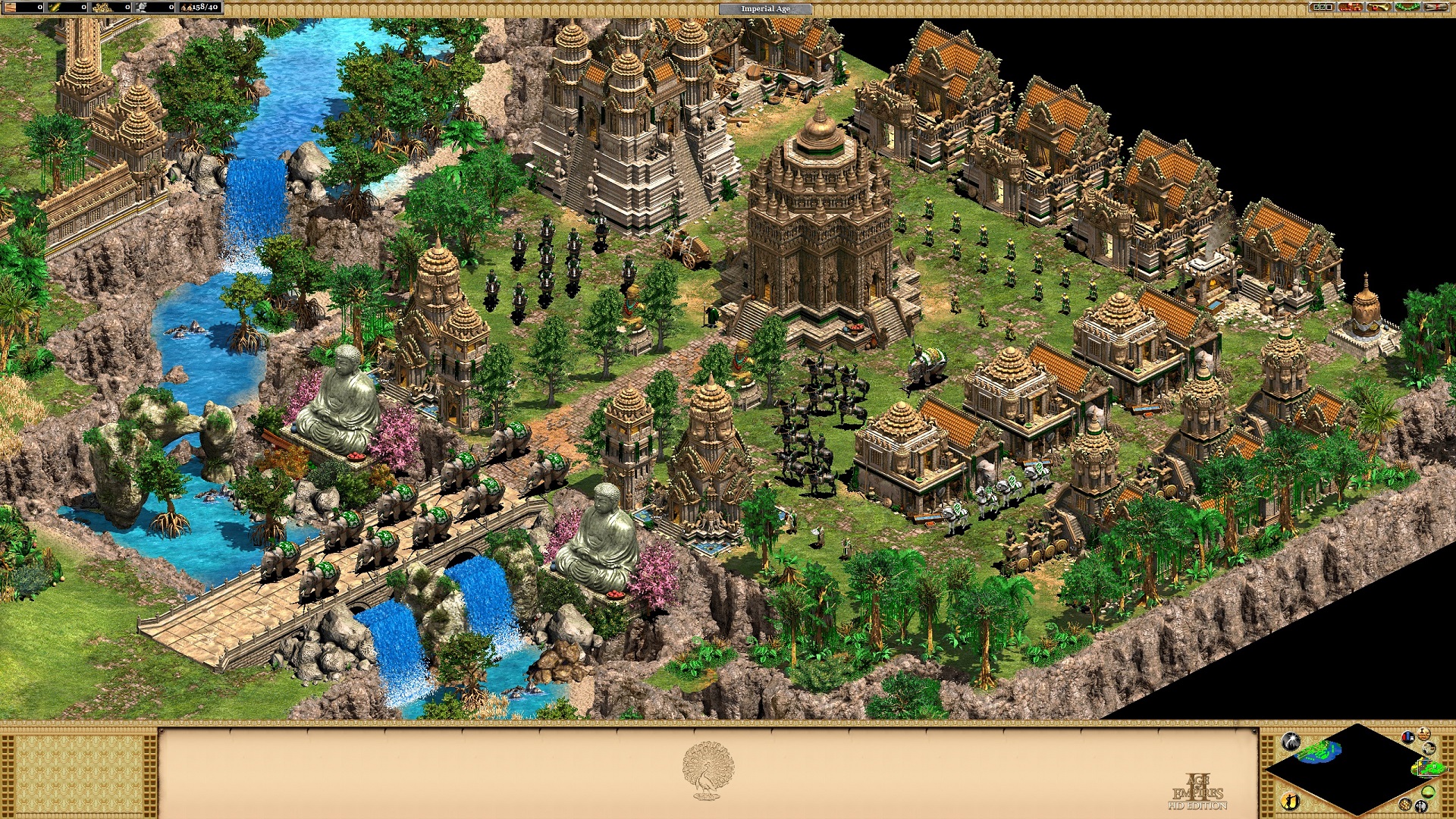 Fortunately, the hot fix solved some problems, but others still remain. I know it's probably because you had to do a lot of things in a short time (so it's MS's fault for pressing you or not hiring more people), but still.All this would have been OK if it was a free mod, but it's normal for users to expect more from an official expansion. Especially when it delivered so much good content in other aspects (civilizations, buildings, campaigns, etc).This message has been edited by aoescout (edited @ 02:16 PM).

I like this game a lot and even tho they don't have their archers my fav are the Malians- there's just something about their feel that is kin to meMaybe it's their guarded town centers that save you a lot of idle time and scare away weak raiding units- I just love defensive civs more and I'm glad they kinda fill that role with a more open approach- cause defensive power houses are rare in aocstill I think it would be cooler if they had their special spearmen on top of that to build moving walls with themThis message has been edited by Childe (edited @ 05:47 AM). Only thing that's slightly bothering is some path finding issuesYeah, that's really not an expansion problem I'd imagine.

AoKHD has horrendous pathfinding when compared to the original game, and it's not something that can really be patched. The original code was just deleted for some unfathomable reason.Compare my PTC entry to CarolKarine's. I used the CD, he used HD. My off grid placement of thousands of objects causes zero pathfinding issues.

He did the same thing, and the result is pretty crippling. This was always the case in The Conquerors and wasn't changed in FE either. There's simply no sound set for attacking galleons in the data.It's crazy how many weird little issues we just got used to over 15 years. Quoted from Mr Wednesday:Yeah, that's really not an expansion problem I'd imagine. AoKHD has horrendous pathfinding when compared to the original game, and it's not something that can really be patched. The original code was just deleted for some unfathomable reason.Compare my PTC entry to CarolKarine's. I used the CD, he used HD.

My off grid placement of thousands of objects causes zero pathfinding issues. The pathfinding code is still there. Microsoft owns the CD version as well, and the code is in that version, so it isn't lost. But skybox made the choice to delete that code from the game and replace it with a clearly inferior version. I hope I am wrong, but I sincerely doubt that microsoft or the guys working for them are going to make that a high enough priority to change. It's not as simple as a bug patch I guess I am saying.I don't own AK yet, mostly because everyone who buys it reports some bug so I'll wait a few months and let them do the usual microsoft model where your testers are your first wave of customers.What's the problem you've been having in the editor with unit placement? Wow okay, didn't know that- maybe the new code has more future possibilities though?

Cause I'm sure they have guys who know code and why would they just replace it with an inferior code for no reason:Panyway that means they can make it better right? So that's great news!sad to hear you didn't give aoak a try yet! You're missing out on some great fun man!the new civs, terrains, units and campaigns (I don't know the portuguese one yet but I'm sure it's similarly challenging as the others) are so gorgeous and especially malians and ethiopians are insanely fun to play with right now (maybe this will change with re balancing but I doubt it)It's just their weird versatility and almost contradictory contrasts (ethiopians being an archer civ with an infantry uu eg) that make them so much more surprising and fun than, dare I say, any civ ensemble studios established- there I said it! And I say it wholeheartedly! Cause that's what really blew me away!